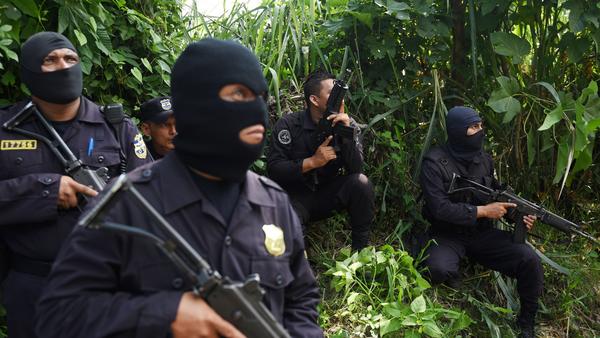 They found the sergeant’s severed head on a bridge. His name was Baltazar Olayzola Diaz, and he had served with the Soyapango municipal police force. Baltazar’s beheading, the national police chief said, was staged by ruthless maras, or gangs, who were negotiating for better prison conditions. He was the 49th police officer assassinated in 2015, and one of 17 people killed that day.

It’s official. El Salvador is the world’s most violent country and its capital, San Salvador, is the world’s most homicidal city. Salvadoran cities have seen more blood spilled than most conflict zones. They are also hemorrhaging people, many of whom are fleeing to Mexico and the United States.

According to new figures produced by the Institute of Legal Medicine in El Salvador, there were 6,656 killings in the country last year. That translates into a national homicide rate of almost 116 per 100,000, more than 17 times the global average. Compare El Salvador’s totals with the 516 slayings reported in 2014 in Canada, a country with almost six times the population.

The circumstances of these killings are disturbingly familiar. More often than not, illegal drugs are involved. The United States government believes that most of the cocaine smuggled from Colombia transits through Central America and Mexico before it’s snorted by Americans.

With so much drug money at stake, violent disputes over shipping routes and retail outlets are routine. The collateral effects of these drug wars mean that innocent civilians get caught up in the crossfire.

But El Salvador’s war is hyper-concentrated among specific people and places. More than 48% of all homicide victims in 2015 were Salvadoran males between 15 and 29 years old. More than half of the country’s homicides occurred in just four areas: San Salvador, La Libertad, Soyapango and Usulutan. The country’s cities are increasingly uninhabitable.

The recent bloodletting can be traced to the dissolution of a unpopular gang truce between rival factions in 2014. Although the cease-fire temporarily halved the homicide rate, it failed to reduce other criminal activities such as extortion. As a result, the government doubled down on supermano dura (iron-fist) policies designed to crush the maras. An aggressive police offensive has since been linked to dozens of massacres and disappearances of gang members.

Complicating matters, El Salvador’s main gangs — the Mara Salvatrucha (MS-13) and the Barrio 18 — are coming apart at the seams. Not only are they at war with the police and with one another, but each is also waging a civil war within its own ranks. With the gangs purging and punishing “traitors” and “snitches,” the bloodletting shows little sign of abating, and it’s spreading to neighboring Honduras and Guatemala. In a bid to keep these countries from spinning out of control, the U.S. Congress recently approved $750 million to fight back against the organized crime, gangs and corruption stalking Central America.

This isn’t El Salvador’s first humanitarian crisis, but it may be the most acute. According to the national Truth and Reconciliation Commission, roughly 75,000 people were slaughtered from 1981 to 1989, during the civil war. That’s the equivalent of 113 conflict deaths per 100,000 people, which means El Salvador today is more violent than during the worst years of one of Latin America’s most vicious conflicts.

Getting El Salvador’s homicide problem under control requires more than better trained police and improved prison conditions, though both are urgently needed. It also demands preventive measures that curb family disruption and protect the most vulnerable members of society. The country’s elite need to avoid the temptation to impose stiffer penalties and throw more people in jail. If they want to reduce crime, they should improve the lives and opportunities of working families and unsupervised youth.

International donors could work with the Salvadoran authorities to make a serious investment in its hardest-hit cities and most vulnerable populations.

FUNDASAL, one foundation in the capital, offers credit to households headed by women, refurbishes community centers and upgrades slum areas in cooperation with local authorities and residents. It seems to be making a difference; families benefiting from targeted cash transfers report lower levels of victimization. Another recently launched program, El Salvador Seguro, is devoted to strengthening the rule of law, rehabilitating young offenders and protecting victims in 50 municipalities.

But these are incremental, small-scale solutions. Ultimately, the only way to reliably reduce homicide in El Salvador — or anywhere in Latin America — is to end the war on drugs. Although supported by the country’s conservative elite, the prohibitionist model is generating more harm than benefit. Without legal regulation, control and enforcement, violent gangs will continue to dominate the illicit drug trade. More enlightened drug policies from El Salvador to the U.S. could make the difference between life and death.