PARIS — The Italian designers of Dolce & Gabbana are no strangers to scandal. After inflammatory comments about gay adoption and accusations of racial stereotyping on the runway last year, the latest apparent misstep by the duo came this week, after the brand listed a pair of $2,395 shoes on its website as “slave sandals with pompoms” and set in motion a social media firestorm.

The Twitter user @DavikaStaar wrote: “@dolcegabbana is an absolutely disgusting company. Their new sandal is titled, ‘slave sandal,’ and that is completely wrong.”

“Dolce & Gabbana. I love you, but why are you glorifying slavery?#slavesandals #fashionfail#marketingfail,” wrote another.

“Beautiful shoes, terrible name” was another popular online refrain, while the user Célinenotthedesigner appeared to place the blame on the shoulders of company’s communications executives.

“Their PR team blind or something?” she posted on Twitter. 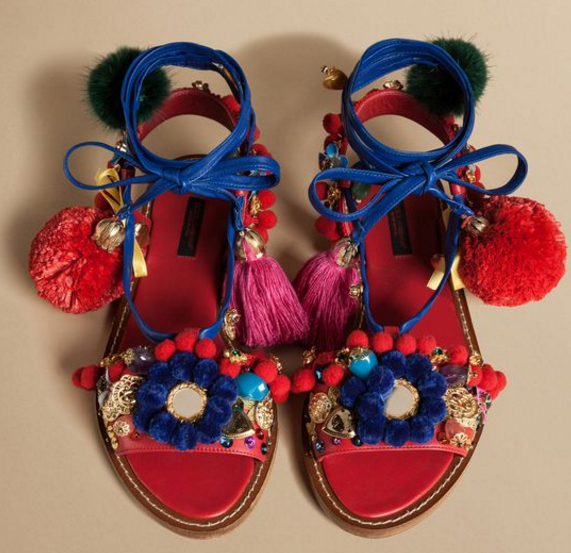 But in the front rows of the Paris shows Friday, there were plenty who took a more measured approach over phrasing that may have been lost in translation.

“That term was quite common in the industry at one time, especially at the height of the Hollywood biblical epics, the likes of ‘Ben Hur’ and ‘Spartacus,’ and people do still use it today,” Tim Blanks, show critic and editor at large at The Business of Fashion, said from the front row of the Dior show.

“I think they just were carrying over a lot from that era into the collection and got swept away,” Mr. Blanks said. “Although I’m surprised it wasn’t picked up sooner as something that might be inflammatory in this day and age. Although it’s not as if the term ‘gladiator sandal’ as an alternative is really that much better.”

Imran Amed, the founder and editor at The Business of Fashion, who sat beside Mr. Blanks, agreed, but added: “Given this is not the first time they’ve got into trouble, you would have thought they would have been a little more careful. This was clearly something that would be dissected.”

The sandals were first placed on the Dolce & Gabbana website as part of a pre-sale of its spring 2016 collection this week, with a description underneath that read: “The spring-summer 2016 collection is a declaration of love to Italy, told through unique clothing and accessories on an imaginary journey through the wonders of this country. Italia is Love.”

To be sure, there was some love lost with other critics, even if the error had been an unintentional one.

“I wouldn’t defend this, but I suppose when a scandal all stems from a single image like that — of a sandal on an online store — you do lose context,” said Robin Givhan, fashion critic for The Washington Post. “It is a little like taking a screenshot from a film.

“But in general, while I am willing to make every effort to put things in the context in which a designer grew up, I also think that this is a global industry and it is a designer’s responsibility to know the broader context. And the context here is pretty obvious.”

Dolce & Gabbana has since renamed the shoes “decorative flat sandals” on its online store, in keeping with the less inflammatory labeling picked by third-party sites; the online luxury fashion retailer Moda Operandi listed the shoes as “pompom wraparound sandals” for example, while Saks Fifth Avenue is selling the shoes as a “pompom leather lace-up sandal.”