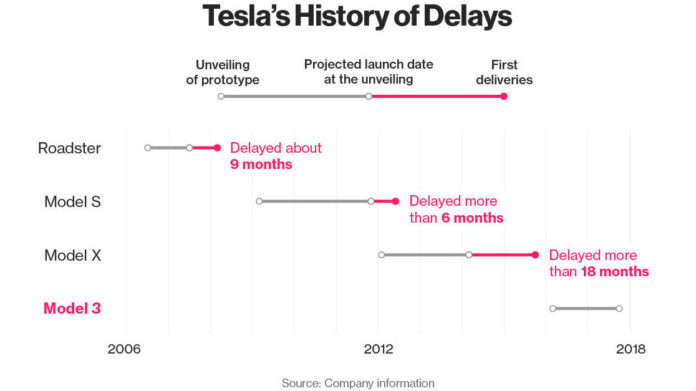 Tesla Motors Inc.’s chief executive officer, Elon Musk, is known for making the future come early. Yet somehow he’s always running behind schedule. Some would call this a failure of management, but it might just be a business strategy. Call it the Musk Doctrine.

It goes something like this: People do paradigm-shifting work only when they’re under tremendous pressure, so the key is to ensure deadlines are always impossible. This could help explain why Musk has never launched a product on time, yet no one seems able to keep up with him. It drives Wall Street nuts.

“Now, will we actually be able to achieve volume production on July 1 next year? Of course not,” he said on Tesla’s earnings call. “In order for us to be confident of achieving volume production of Model 3 by late 2017, we actually have to set a date of mid-2017 and really hold people’s feet to the fire, internally and externally.”

Calling His Own Bluffs

What makes Musk’s deadline bluffs unusual is that he makes them public and lets investors hold him to account. Take what happened when he dropped his biggest bombshell last week, unveiling what is arguably the most ambitious production timeline in the history of cars. Musk said he plans to go from making about 50,000 electric cars a year to 500,000—by 2018.

That’s two years ahead of his previous target, which itself was dismissed by Wall Street as nearly impossible. And 2018?  That’s “too aggressive, setting up investors for disappointment,” wrote UBS AG analyst Colin Langan in a note to investors.

Some may even view Musk’s strategy as having less to do with motivation and more to do with financing. Ryan Brinkman of JPMorgan Chase & Co. said the new target may be seen as a “perfect rationale for a large equity capital raise.”

But Tesla doesn’t necessarily need a new justification for raising capital. Wall Street was already anticipating such a move after the company took in 400,000 (refundable) deposits, at $1,000 apiece, for the Model 3—showing a level of demand that was as unexpected as it was unprecedented. If anything, the head-scratching 2018 goal is making investors more nervous about the cash burn, not less.

“We are all for setting aggressive targets,” wrote Joseph Spak, an analyst at RBC Capital Markets. “However, Tesla is increasingly asking the equity investor to sign up for a complex manufacturing ramp the likes of which we don’t believe [has] ever been seen before. This brings both elevated expectations and execution risk.”

The only way to make real sense of the new deadline is to apply the Musk Doctrine. Consider that he might have been running dangerously close of meeting one of his impossible deadlines. If the 2020 goal looked as if it could actually be met, that meant everyone could be working harder, and thus expectations should be moved forward. So that’s what Musk did. He now projects 1 million annual electric car sales by 2020. Try meeting that goal.

The gambit comes with risks. While it ensures a sense of mission among Tesla employees, it runs the risk of burning them out just when the company can afford it least. Two of Tesla’s top manufacturing executives are leaving before the big Model 3 push, Bloomberg reported last week. When describing the accelerated timeline for tooling the Model 3, Musk quipped, “If you can create a human baby in nine months, you can pretty much make a tool in nine months.” Gestation never seemed so easy.

The markets weren’t so sanguine. Usually when a company significantly increases its forecast, the stock price goes up. Not this time. After Tesla announced its new target, shares dipped. Analysts cited a new risk of failure in the 2018 deadline, including the extra capital it would require to even attempt it.

The new forecast, like the original 2020 deadline, seems a farce. But something funny happened on Thursday, the day after Musk moved the goalposts. Even as Tesla’s stock declined, analysts and auto enthusiasts almost universally moved their own estimates for Tesla unit sales higher. In the same report in which RBC’s Spak warned of “the risk to new investment” and maintained a neutral rating on the stock, he nearly doubled his forecast for Tesla’s 2020 sales, to 620,000. That’s higher than Musk’s old target—the one most considered impossible.

This may be the doctrine at work. Even though Tesla’s founder is almost certain to fail at his new goals—and is putting the faith of his investors and car buyers at risk in the process—he also just changed everyone’s horizon of expectations. What was once considered an impossibility for Tesla, and for electric cars in general, is now considered the most likely course of events.