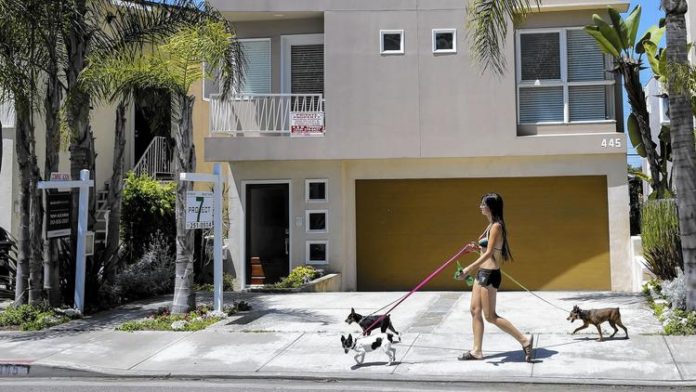 After two years of slim pickings for Southern California home buyers, the supply of houses for sale may be starting to open up, at least a bit. And that could power the region’s housing market to a stronger spring.

Market watchers and real estate agents say they’re starting to see more sellers as prices remain relatively high, interest rates stay low and fewer borrowers owe more on their houses than they’re worth. The number of homes listed for sale in February climbed 9% in Los Angeles County from a year earlier, according to data from the California Assn. of Realtors, and the time it would take to sell every house on the market was at its highest level in three years.

“Supply is not an issue right now, not like it was,” said Rich Simonin, chief executive of Westcoe Realtors in Riverside. “It’s not a problem.”

That’s a shift from the last few years, when many sellers held their homes off the market and bidding wars were common for the rare well-priced listing. More supply should help keep prices in check, economists say, and coupled with an improving economy could help fuel a broad recovery in the region’s housing market over the next few months.

But so far the housing market has been in a slump.

Home sales in the six-county Southland fell 2.7% in February from a year earlier, according to figures out Tuesday from CoreLogic DataQuick; it was the 15th time in 17 months that sales have fallen. Although the region’s median sale price of $415,000 was up 8.4% compared with February 2013, it has been basically flat since last summer, when it plateaued as many buyers hit a ceiling for what they could afford.

Selma Hepp, senior economist at C.A.R., says measures of buyer interest — online real estate searches and open-house traffic — have jumped in recent weeks. If that activity translates into sales, it could put a new round of pressure on pricing, she said.

“The fundamentals are good,” Hepp said. “But affordability is going to stare us right in the face again.”

For many buyers looking at the bottom half of Southern California’s high-cost housing market, affordability never stopped being an issue. The supply of homes for sale remains far tighter at prices below $500,000 than above it, according to C.A.R.’s data. And good homes in that price range tend to sell fast.

Aviva Lomeli, an agent with Redfin who works in southeastern Los Angeles County, saw just how fast over the weekend.

Lomeli listed a home Friday in Downey for $499,900. She held open houses Saturday and Sunday and had 20 to 25 groups of buyers come through each day. Five made offers, one at $25,000 above the asking price. And she expects the house will be under contract this week.

“That’s very quick,” Lomeli said. “It feels like in the last few weeks the market has taken off.”

If it has, prices will rise quickly unless still more sellers step in, said Andrew LePage, a CoreLogic analyst. The key to a healthy housing market, he said, is still supply.

“That’s going to be a huge part of the story this spring and summer,” LePage said. “If we don’t see a meaningful jump in inventory, we’ll be right back up against affordability constraints.”

In the long term, though, it will require more than a seasonal jump in home sellers to boost supply and help more Californians afford housing.

A new report also out Tuesday said the Golden State needs to build roughly 100,000 more homes each year than it does now — nearly all in coastal regions — to ease housing costs that are already 2 1/2 times the national average. Those costs harm the state’s economy in a variety of ways, says the report from the independent Legislative Analyst’s Office, by prompting Californians to endure longer commutes, crowd into smaller homes, put off homeownership and even leave the state.

But right now, said Simonin, the housing market is as stable as he can remember it being in a long time, balanced between buyers and sellers, appreciating but still somewhat affordable.

“It won’t stay this way very long,” he said. “We should enjoy it while it does.”