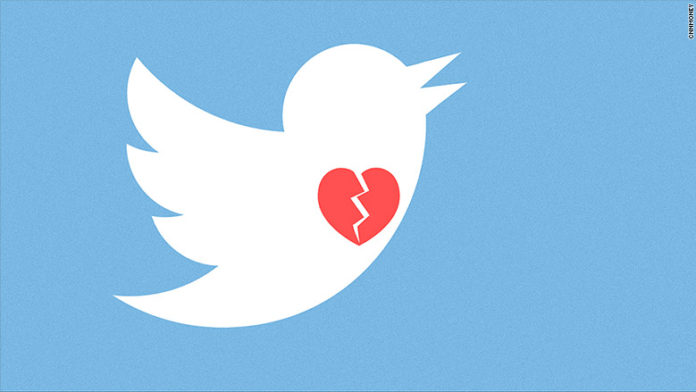 It’s hard for the small core of Twitter addicts to accept, but Twitter just isn’t popular enough to be successful. In fact, Twitter is losing customers.

The social media company reported Wednesday that it lost 2 million users in the last three months of 2015. Shares plummeted as much as 12% in after-hours trading.

Twitter had 305 million active users by the end of 2015. By contrast, Facebook (FB, Tech30) has 1.6 billion. Google (GOOGL, Tech30) has eight products with over 1 billion users each. Even Instagram surpassed Twitter in September, growing to 400 million users.

Though Twitter (TWTR, Tech30) has been able to effectively generate sales from sponsored tweets and partnerships, it’s growing at a snail’s pace. It’s still a relatively niche product that hasn’t been able to expand its reach the way that its rivals have.

New management, products, designs and features haven’t done much to move the needle. Twitter’s growth has stagnated, and it’s nowhere close to turning a profit.

Twitter is aware of the problem and has launched a slew of new products to address the issue. Notably, Twitter announced Wednesday that it is testing a new algorithm that will change the chronological order of feeds, hoping to appeal more to casual users who aren’t obsessively keeping up with thousands of tweets in real time.
On a Periscope chat with analysts, Twitter CEO Jack Dorsey said its new timeline feature has shown “real promising growth” in user engagement.

“We’re going to refine our core service and make everything more intuitive,” Dorsey said. “There’s an opportunity to fix broken windows and confusing aspects that are inhibiting growth. We think timeline is a big part of that.”

Meanwhile, Twitter’s management is in turmoil. The revolving door of executives continues to spin, and the company recently announced its product, engineering, media and HR directors are all leaving for greener pastures.

Dorsey said Wednesday that Twitter’s management needed to be streamlined. Twitter’s CTO Adam Messinger has been given enhanced responsibilities, making most of the decisions about Twitter’s product. Dorsey said he hopes to beef up Messinger’s team with a heavy recruiting effort in 2016.

He also said Wednesday that new board members will be coming to the rescue soon.

Dorsey is a part-time CEO, splitting his time with his other company, Square (SQ). That irks many investors who think that Twitter needs a CEO’s undivided attention. But Dorsey said on the Periscope chat that he has set up a structure that “has worked very well,” allowing him the flexibility he needs to run both companies. He said he is most actively involved in recruiting for Twitter.

It wasn’t all bad news last quarter. Twitter reported record sales. The company continues to succeed in its advertising initiatives. The company said it had 130,000 advertisers by the end of the fourth quarter, up 90% over the previous year.

But the company said it expects sales growth to slow in the current quarter. It predicted that revenue will be between $595 million and $610 million this quarter, far below the median forecasts of analysts surveyed by Thomson Reuters.

Twitter continues to lose money. Though its losses narrowed, it shows no signs of turning a profit.

Twitter lost 2 million customers in the last three months of the year. Compared to a year earlier, Twitter’s customer base grew by just 6%.

The company said it reduced the number of emails it sent to dormant customers to try to get them back onto the service. The fourth quarter is also typically a weak quarter for customer growth.