Thursday, while the nation debated the relative size of Republican genitalia, something truly awful happened. Across the northern hemisphere, the temperature, if only for a few hours, apparently crossed a line: it was more than two degrees Celsius above “normal” for the first time in recorded history and likely for the first time in the course of human civilization.

That’s important because the governments of the world have set two degrees Celsius as the must-not-cross red line that, theoretically, we’re doing all we can to avoid. And it’s important because most of the hemisphere has not really had a winter. They’ve been trucking snow into Anchorage for the start of the Iditarod; Arctic sea ice is at record low levels for the date; in New England doctors are already talking about the start of “allergy season.”

In part this reflects the ongoing El Nino phenomenon — these sporadic events always push up the planet’s temperature. But since that El Nino heat is layered on top of the ever-increasing global warming, the spikes keep getting higher. This time around the overturning waters of the Pacific are releasing huge quantities of heat stored there during the last couple of decades of global warming.

And as that heat pours out into the atmosphere, the consequences are overwhelming. In the South Pacific, for instance, the highest wind speeds ever measured came last month when Tropical Cyclone Winston crashed into Fiji. Entire villages were flattened. In financial terms, the storm wiped out ten percent of the nation’s gross domestic product, roughly equivalent to fifteen simultaneous Hurricane Katrina’s. 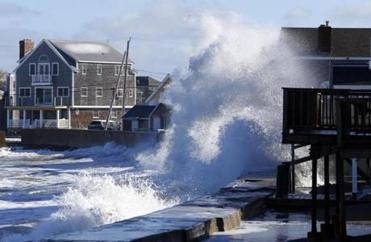 Sea level rise was quicker in 20th century than elsewhere

This was followed by a few months of the highest wind speeds ever recorded in our hemisphere, when Patricia crashed into the Pacific coast of Mexico. And it joins all the other lines of misery: the zika virus spreading on the wings of mosquitoes up and down the Americas; the refugees streaming out of Syria where, as studies now make clear, the deepest drought ever measured helped throw the nation into chaos.

The messages are clear. First, global warming is not a future threat — it’s the present reality, a menace not to our grandchildren but to our present civilizations. In a rational world, this is what every presidential debate would focus on. Forget the mythical flood of immigrants — concentrate on the actual flooding.

Second, since we’re in a hole it’s time to stop digging — literally. We’ve simply got to keep coal and oil and gas in the ground; there’s not any other way to make the math of climate change even begin to work. There is legislation pending in the House and Senate that would end new fossil fuel extraction on America’s public lands. Senator Sanders has backed the law unequivocally; Secretary Clinton seemed to endorse it, and then last week seemed to waffle. Donald Trump has concentrated on the length of his fingers.

No one’s waiting for presidential candidates to actually lead, of course. In May campaigners around the world will converge on the world’s biggest carbon deposits: the coal mines of Australia, the tarsands of Canada, the gasfields of Russia. And they will engage in peaceful civil disobedience, an effort to simply say: no. The only safe place for this carbon is deep beneath the soil, where’s it been for eons.

This is, in one sense, stupid. It’s ridiculous that at this late date, as the temperature climbs so perilously, we still have to take such steps. Why do Bostonians have to be arrested to stop the Spectra pipeline? Anyone with a thermometer can see that we desperately need to be building solar and windpower instead.

In a much deeper sense, however, the resistance is valiant, even beautiful. Think of those protesters as the planet’s antibodies, its immune system finally kicking in. Our one earth is running a fever the likes of which no human has ever seen. The time to fight it is right now.

Bill McKibben is the founder of the climate campaign 350.org, and the Schumann Distinguished Scholar in Environmental Studies at Middlebury College.