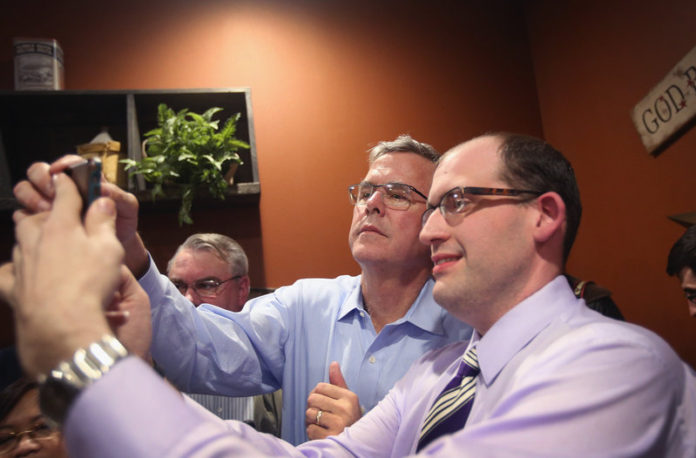 Just after midnight Monday, Texas Sen. Ted Cruz scooped his own big announcement by about 10 hours. Ahead of a planned speech, he posted the news of his presidential bid on Twitter.

“I’m running for President and I hope to earn your support!” he tweeted.

The tweet, which included a 30-second video, was retweeted more than 3,000 times in 30 minutes. Cruz’s announcement generated 5.7 million interactions (likes, posts, comments and shares) Monday on Facebook. And during his planned speech at Liberty University, his staff live tweeted lines from the speech on his account.

Cruz’s attention to social media is the first salvo of campaigns trying to get on their digital games ahead of 2016. But there are also signs of how complicated building a digital audience can be. Cruz, for example, still trails some Republican rivals on Twitter, and they all trail Democrat Hillary Clinton. But it’s a different story on Facebook, where Clinton is far behind Republicans, like Rand Paul and even Cruz.

But campaigns are not won on Twitter and Facebook — YikYak, Meerkat or Snapchat, for that matter. They’re all important, but having a digital strategy for a presidential campaign has evolved in the age of Obama — and it’s become something more, including complex behavioral analytics used to reach voters, raise money, and get out the vote.

Republican consultants and the Republican National Committee have pushed hard to learn from the lessons of the 2008 and 2012 presidential campaigns. They recognize the growing significance of an effective digital campaign strategy — a lack of which, some said, cost the party in the last two presidential campaigns. The RNC overhauled its digital infrastructure and tried out new strategies in the 2014 midterm elections, which it saw as a good first step — and testing ground — before the next presidential election.

“The left are much better early adapters, and I admire their approach,” said Ned Ryun, CEO of American Majority, a conservative group that trains political organizers. Republicans, he said, “need to get over their discomfort … or they’re setting themselves up for another loss.”

But it’s not always about finding what’s new.

“It doesn’t have to be this new, big shiny thing,” said Brian Donahue, a partner at Republican digital strategy firm Craft. “It’s about making a greater investment in existing tools.” CPAC 2015 attendees take a break to check their phones.

Still, prospective Republican contenders in the 2016 race are looking to show that they can do more than send email. Rand Paul and Jeb Bush both garnered attention for using Meerkat, a live-video streaming app that has become the darling of the South by Southwest sect.

“You’re going to see some window dressing to show that candidates are in touch,” Donahue said. “There is a risk of coming off gimmicky. We’re waiting to see the first candidate to use a selfie stick.”

In anticipation of 2016, one big challenge Donahue’s team, and others, have is mobile technology.

“You’re seeing more and more people relying on mobile devices,” he said. “No one has a clamp on that yet.”

Political organizations are building in digital training at the grassroots level, too. Earlier this year, the Conservative Political Action Conference held its first training sessions on “hacking” Facebook and Twitter, and using data-tracking tools such as Open Secrets — a resource for campaign-finance contributions and lobbying data — to keep up to speed on political activity. And in May, the Americans for Prosperity Foundation will hold the Right Online conference, which educates citizen activists on using digital media in the public policy process.

There is interest in learning about digital tactics, Austin James, digital director of Republican political software firm CMDI said. But investment from the campaigns is a different challenge. He said it’s hard to convince Republican campaigns to put money into digital strategy when it can’t be proven that more Facebook fans directly translates to more votes.

That was certainly the case in 2012, which revealed a large split in digital campaign spending. The Obama campaign reportedly invested $47 million in digital efforts for the president’s re-election — 10 times what the Romney campaign spent.

“It’s kind of like changing the direction of an ocean liner,” James said of getting Republican activists to consider straying from traditional campaign practices of a decade ago.

Cultivating an appealing online persona that voters can get behind is also critical, said Pamela Rutledge, director of the Media Psychology Research Center.

“Even in 2008, [Obama] was aware of social media as a force and he was able to activate a voting population that hadn’t previously been engaged,” Rutledge said. The Romney campaign, she said, “really misunderstood the reach of social media.”

Collecting and managing large amounts of voter and volunteer data to target communications and social media efforts to specific demographics will be a big part of that in 2016. For example, keeping track of public responses to the candidates, Ryun said, allows campaigns to tailor the messaging to best attract a particular audience.

“Having the data will help candidates make better decisions,” he said. “If you think a message is resonating, you can use data to back that up.”

It’s still early in the 2016 game, but the right has already seen some digital campaign misfires. Jeb Bush’s short time chief technology officer, Ethan Czahor, was forced to resign after it was discovered he had had sent disparaging tweets about women, gay people and African-Americans.

“Nobody bothered to read the guy’s Twitter feed,” Rutledge said, “and it wasn’t reflective of the kind of messaging you want in a campaign.”

And the digital strategist for another potential candidate, Gov. Scott Walker, resigned just one day after she joined his political team. She left over tweets that criticized Iowa‘s role in the political process.

But she added that Democrats may well face some big challenges in the digital space, too.

“Yes, the Republicans had problems,” Rutledge said, “but you can’t assume that just because Obama’s team did a good job that Hillary’s going to do a good job.”

Clinton is the far-and-away favorite on the Democratic side but, Rutledge points out, she has been criticized for sending tweets late in the game to share her stance on controversial issues, such as vaccination. She quickened her Twitter response time to about one day when she weighed in on her scandal involving the use of a private email server. But a day can still a lifetime for digital natives.

“That’s what social media does — it exposes the gaps,” she said. “This makes her seem weak.”

More important, though, than the rapidity of Clinton’s tweets, some Democrats have complained more substantively that the Obama campaign team’s knowledge might not filter down to Clinton — or the Democratic Party infrastructure.

The formation of Organizing for Action, for example, the re-branding of the Obama presidential campaign’s Organizing for America, rubbed some Democratic National Committee members the wrong way. It was seen by some as a shadow DNC that wouldn’t share all of the keys to the castle and was draining the party of resources.

And Clinton — or whomever the Democratic Party offers up as their nominee — will still be in better shape digitally than the Republican counterpart contends Joe Rospars, chief digital strategist for both of Obama’s presidential campaigns and CEO of Blue State Digital.

The DNC, he said, “has an incredible data infrastructure. The party waits for you to become the nominee, and you inherit that.”

Rospars noted that no candidate would be operating in the digital sphere alone, which places a major significance on who has the stronger digital team.

“I think if [Hillary] decides to run, there is more talent at the staff level and the grassroots level,” Rospars said. But, he added, “Our side has the talent and culture to run a smart, innovative campaign.”