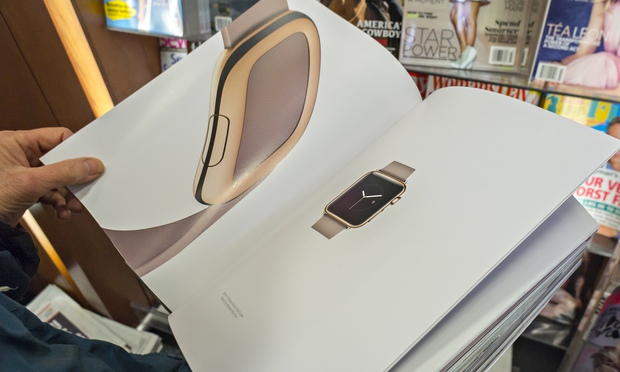 For many Apple watchers, Monday’s launch of its new watch is a significant step in the effort to turn the company into a technology-based luxury brand.

The strategy was signalled initially with the hiring of Angela Ahrendts from Burberry a year ago to transform Apple’s retail business. It has since been seen repeatedly in hiring from within the fashion and luxury-brand industries. But it will face its first new product test with the Apple Watch.

Led by Apple design chief Sir Jonathan Ive, the 48-year-old British designer who is now effectively the face of the company after recent profiles in the New Yorker and US Vogue, Apple is placing new emphasis on design and style appeal.

While the last iPhones came in a range of three colours, according to reports there will be no less than six metal options for the watch – notably including two types of gold, 18-carat yellow and 18-carat rose. There will be six band designs, two face sizes and 11 face designs. Chief executive Tim Cook has said the product will “redefine what people expect from a watch”. Ive says it will be “a move away from what is traditionally understood as consumer electronics”.

Ive hired industrial designer Marc Newson to work on the Apple Watch. An intimate of the fashion industry – his wife is Fendi and Victoria’s Secret stylist Charlotte Stockdale – Newson choreographed the initial unveiling of the product for fashion designers and editors during Paris fashion week last September.

“The fashion industry has an enormous amount to offer in what we do in industrial design because fashion is fast, fashion has its finger on the pulse,” he told Women’s Wear Daily. “There are very few creative industries that work on that rhythm.”

Apple has repeated that pattern since, throwing a celebrity-packed dinner in Paris hosted by Azzedine Alaïa, the couturier who has dressed women from Madonna to Carla Bruni and Michelle Obama. The technology company also invited fashion houses to submit designs for the face of the watch, the theory being that fashion followers will want to parade their preferences with technology as they might with shoes or handbags.

Further emphasising Apple’s interdependence on fashion branding, the watch launch in Cupertino, California will be staged, as it was in September, by Gainsbury & Whiting, the London-based design firm behind the Alexander McQueen show Savage Beauty at the Victoria and Albert Museum.

Within the industry, technology’s growing relationship with fashion is seen as key to the acceptance of the new wearables. By some estimates, wearable technology could be worth $30bn (£20bn) in sales by 2018. Last year, Google teamed up with the inventor of the wrap dress, Diane von Furstenberg and fashion website Net-a-Porter for the launch of Google Glass. Chip maker Intel has launched several fashion-orientated initiatives.

All this also means that China remains key to Apple’s strategy. The country is forecast to account for as much as half of global luxury goods sales by 2025. Apple’s staggering $18bn profit on $75bn of revenue reported in January came on the back of a 70% increase in China, Hong Kong and Taiwan compared with the same period a year ago. More than a fifth of its worldwide revenues – $16.1bn – came from that region alone, making Apple the top selling smartphone maker in China.

Credit for Apple’s growth in Asia is given to Ahrendts, who placed growth in China – where Apple is subject to widespread black-market trade – one of her top three priorities. With a mandate to improve Apple’s shopping experience, Ahrendts is rumoured to have hired Sir Norman Foster to redesign the firm’s stores.

Apple’s reach into fashion with the Watch, its first new tech category since Steve Jobs’s death, is no longer being dismissed as a novelty by traditional rivals. Experts predict that the Apple Watch will affect only the high end of the fashion-watch business, not the high-end luxury watch market. Still, there’s no doubt the traditional industry is watching closely. With retailers expecting first-year sales of 20m Apple Watches, Tag Heuer and Swatch Group – which owns Breguet, Blancpain and Omega – are looking to introduce their own smartwatches. Fearing the iWatch trademark Apple was registering was too close to the iSwatch name of its digital-display model, the Swiss group has taken steps against Apple in countries where Apple had registered the name.

While Apple looks for an edge by focusing on classic design and style, other tech manufacturers will doubtless follow. How far Apple is prepared go in repositioning itself as a luxury technology brand will be on view in San Francisco and on live stream across the world. Clive Grinyer, a friend and former colleague of Ive’s, told the New Yorker: “He’s always been a bit bling … Jon’s always wanted to do luxury.”